Root International > About Us 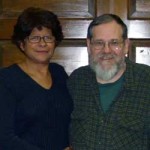 Like a root we support organizations in benevolence and education as God directs. Root is a nonprofit ministry that works to bring resources to churches, other ministries and community organizations to facilitate the work God has called them to do. In the early 1980’s, ROOT had its beginnings in El Paso, TX. Art Vogan saw that there was a lack of networking between the local churches and ministries, and so he elected to be the liaison in helping them to share their resources with one another. Twenty years later, in 2001 God extended the network to Mercer, Pennsylvania, Art’s home town, and with the help of Art’s home church, Bethany Presbyterian Church, ROOT International began to take shape. In 2005 Art and Rebecca Vogan and Joyce Hart became the first officers of ROOT International. Sadly, in November of 2005, Joyce passed away and God sent Vicki Narlee to take her place. In 2007 ROOT received its 501(c)3 status.